A Matriarch Vampires short story by Kevin A. Ranson

Between the passengers and their equipment, six people occupied the space of twelve, almost the capacity of the elevator.

Five of the riders wore blue gloves and knee-length white coats over scrubs; the sixth wore a dark suit and a wireless earpiece. A lab cart had been assigned to each of the technicians while the man in the suit carried a computer tablet. Everyone looked straight ahead in silence, focused on the task at hand.

The doors opened; the stop switch was pulled. The suited man started a timer on his tablet as the five techs pushed their carts out of the elevator. Of the thirty rooms connected to the long hallway, five had been pre-selected; in concert, the techs knocked and waited while the suited man watched.

One by one, the techs disappeared into the rooms as each door opened. The suited man quietly observed from the hallway so as not to interrupt the collection; time was of the essence.

In the first room, the elderly resident had been watching a movie before pausing it. He surrendered his right arm as the tech prepped his skin and expertly inserted a needle attached to a cup. The resident winced for a moment and relaxed.

Collection was already proceeding in another room. The tech quickly inserted a red-capped glass vial into the needled cup and twisted it to begin the flow of blood. When it was filled, she twisted it out again and replaced it with another. The move was practiced and smooth; the donor smiled at the absence of any discomfort. Once the needle was removed, a sterile gauze pad was taped over the skin as familiar instructions were hastily issued to the donor.

The suited man checked the time as the technicians emerged from their assigned rooms. On each of their carts were ten red-capped glass vials filled with blood, fifty in all. Noting the collection on his tablet, the group headed back to the elevator. Once everyone was inside, the stop switch was depressed to release the elevator; the doors closed.

On the ground floor, the collection carts were pushed into the secured blood lab while the suited man followed. Each of the procured vials were quickly but carefully inserted into a circular tray that held the exact number of samples collected. The tray was pushed beneath a stainless steel apparatus that aligned with each vial simultaneously; a lever raised the tray into the metallic device and locked it into position. Levers on two support arms elevating the apparatus over the table were disengaged, allowing the entire device to be inverted. 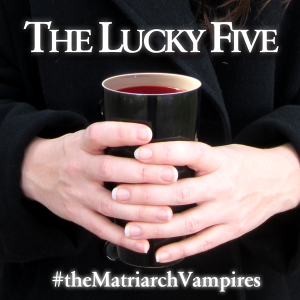 Alerted by the beeping from a standard microwave oven, a warmed ceramic cup was withdrawn, black on the outside and white on the interior, the tall kind used in trendy coffee houses. After securing the cup beneath a nozzle, a button was pressed that drained the vials into the waiting cup below, filling it to within half an inch of the top – a perfect pint.

The suited man noted the time on his tablet, nodded in approval to everyone in the lab, and took the cup away with him. In the office he worked out of, he set the cup down on the far edge of his desk and checked to ensure there was no spillage. Satisfied, he sat down and resumed his work, waiting.

Within a few minutes, the executive administrator entered the office. Going right to the cup, she smiled at its warmth as she picked it up.

“It never ceases to amaze me that you have this waiting every time I come in,” she said. “Who are today’s lucky five?”

The suited man looked away from his laptop. “You tell me.”

After flashing him a knowing smile, the administrator lifted the cup to her lips and drank deeply.