Is there a statute of limitations for immortals? If someone wrongs an immortal and escapes their wrath into death, should their offspring suffer?

I’m not talking about reparations. I’m talking about pure revenge. This isn’t even a right or wrong question; it’s a question of motive.

Ruth recently mentioned Deuteronomy 5:9 to me, the often-misquoted bible verse: ‘…for I, the LORD your God, am a jealous God, visiting the iniquity of the fathers on the children unto the third and fourth generation of them that hate me.’ Yes, that’s a bit specific and in no way forgiving.

Let’s say for example that Nancy Ward — for whatever reason — was still alive. Nanyehi was born into the Wolf clan of the Cherokee at Chota (the hills of Eastern Tennessee) in 1738. She rose to fame taking up arms against the Creeks after her husband fell in battle, earning her the title Ghighau, the “Beloved Woman of the Cherokee,” a powerful position of influence within the tribal government. With the creation of Fort Loudin on the frontier, Cherokee and colonists traded and sometimes mingled; Nanyehi took the Anglicized name Nancy Ward and learned English when she married English trader Bryant Ward. In contrast to her warrior instinct or perhaps because of it, Nancy sought peace between her native people and the encroaching colonists until her death in 1822.

For all the good it did.

In 1830, President Andrew Jackson ratified his Indian Removal Act. Five tribes were to be relocated off lands east of the Mississippi, but the Cherokee were the last and fought the hardest. After two separate appeals to the US Supreme Court, the sovereignty of Cherokee land was ratified and legal; they could not be moved. Undaunted, Jackson drafted the Treaty of New Echota, convincing a handful of Cherokee to go against their nation and illegally sign their lands away for compensation in 1835. After the expiration of a two-year grace period to move on their own, the US Army was commissioned to round up all tribesmen they could find and in 1838 marched them through the winter into Oklahoma. It is estimated up to 4000 Cherokee died on the Trail of Tears — one-quarter of a proud nation. 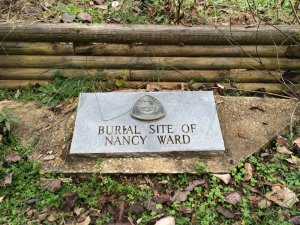 Was Nancy right or wrong? There are some who claim she is not a hero but a traitor for suggesting peace as a solution in the face of overwhelming odds. If she somehow knew what happened after her death, if she had the means and the knowledge, would she hold the ancestors of the attempted destruction of her people accountable? I don’t think she would. She had been the warrior, seen the death, and it affected her. Were she alive today, I think Nancy Ward would be a teacher, instructing today’s youth and sowing the seeds of tolerance rather than hate. Imagine having 275 years of knowledge and memory to draw from; nothing good could come from the destruction of anyone who wasn’t present when these horrors occurs.

Maybe Nancy IS watching from the afterlife…or maybe she’s watching from closer than that. Maybe we should stop demonizing groups of people so that profiteering corporations and politicians can’t use fear to make money and take power for themselves. Those are American traditions we can all live without. But let’s be honest: your decision to be a better person shouldn’t be based upon threats of wrath from a divine creator or a vengeful spirit. It should be based solely on wanting to be a better person and treating others with respect and understanding.

Do unto others; blessed be; harm none.

That should do it.