Pretend you’re a Vampire (it’s okay if you’re not). You live forever and your needs are few: a hole in the ground to hide from the sun and a drink or three from any mortals who happen along. Housing? Vehicles? Phones? A nicer crypt with good Wi-Fi? None of it a necessity.

Vampires can get by with very little when we have to. If you’re mortal, well… not so much.

Health care is a big one… if you can afford it. Mortals need a job that pays enough to save up for when they can’t work, fall ill, or simply choose to retire — not to mention taking care of any immediate and/or extended family. Heat in the winter, A/C in the summer, a variety of food all-year round and not just cheap take-out? 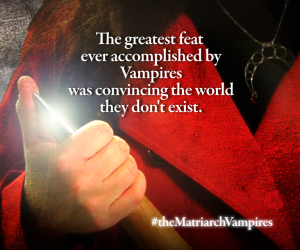 Centuries ago, villagers once lived their entire lives in terror that a bloodsucking corpse would enter their homes at night to steal their children. It’s not that Vampires couldn’t — no invitation needed — it’s that we choose not to. Destroying one another is always a missed opportunity for any future benefit.

Vampires aren’t The Evil Ones. We have the capacity for good.

Gods and kings (and some politicians) however need to demonize — an enemy for their followers to fear and hate. The devil, the non-believers, the ones with different ideas… anything that isn’t “us” must be “them.”

The truth, however, is that they use their followers to overcome their own fear: the fear of being irrelevant.

When intelligent beings work together, becoming familiar and understanding with one another, the xenophobia dies. Gods, kings, and politicians no longer have anything to divide us with, and when the occasional asshole appears to take advantage of kindness and generosity, the rest can let them know it won’t end well for them.

We must choose to get along or risk destroying ourselves.

Doesn’t it make more sense to lift one another up than wasting time keeping everyone else down?

I’ll defer to Joss Whedon for the rest:

The enemy of humanism is not faith. The enemy of humanism is hate, is fear, is ignorance, is the darker part of man that is in every humanist, every person in the world. That is what we have to fight. Faith is something we have to embrace. Faith in god means believing absolutely in something with no proof whatsoever. Faith in humanity means believing absolutely in something with a huge amount of proof to the contrary. We are the true believers.