Yes, I’m late with the post. Timothy pointed out that there was a lot of doom and gloom here; guilty as charged. So I scrapped the one I was working on. You wanted honesty, right? I admit it: I’ve been venting.

So he asked me THIS question: since becoming a vampire, what makes me happy? 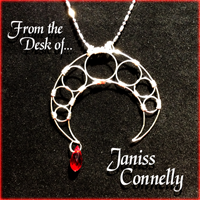 I could say “feeding” since it has become a priority, but that’s less happiness or more satisfaction. Human contact is more important than you’d think, holding someone and having them hold you in return; I think I’ve always enjoyed a good hug (yes, I’m a hugger). But the question was specifically since becoming a vampire.

I’m going with “living without fear.”

The idea of being vulnerable has always frightened me. Maybe it was hearing all of my mom’s warnings about dangerous things out there trying to “get me” since I was a girl and the terrible things that happened on the news. Don’t go out alone; avoid strangers; let people know where you are; never use an interstate rest area at night ever. Sorry guys, but we lady-folk are plagued by fears both irrational and well-founded.

But since finding and accepting my own power, I honestly fear nothing.

I’m afraid for others now, but no longer for myself. It’s weird when I think about it. This is a guy thing, apparently, or at least they tell me it is.

Try it yourself. WATCH people when you go to a grocery store, the shopping center, or the dreaded rest area. There are two kinds of people: predators and prey, and they perform accordingly.

Human prey looks nervous even when they pretend they’re not; I never realized before having actual power how obvious they were. The body language, the caution in their step. Single parents, by the way, are the worst, especially when tackling more than one child. It’s like they’re bracing for impact or waiting for the bomb to go off. As they drive away in the blanket-like protection of their cars, they finally start to relax, feeling again in control of something…of anything.

Human predators are why the prey look nervous. Yes, they’re glancing around, noticing things, but they’re more relaxed. They’re not looking to defend themselves; they’re looking for targets…to get ahead of other predators. A note about the big guys: it’s not about size, it’s about attitude. Ever see a bouncer at a club? The alphas acknowledge one another with so little as a nod, but the message is clear: we’re good. They’re not in competition so much as two huge trucks passing on a highway. Honk-honk; no one has to die today.

My dad told me this is what “being cool” was all about when I was a kid: you’re ready to fight. You never start one but you’re always prepared to finish it. I never got into fights because Eric and Daniel were always around, so I probably grew to be less cautious than I should have been.

Ian taught me that lesson.

But now? Just being me is pure bliss.

I know I can put my fist through a good-size tree trunk. I move so fast now that anyone not a ghoul or vampire seems slow. No, not that ridiculous super-speed you saw on “True Blood” or the Twilight movies, but Mr. Miyagi in The Next Karate Kid kind of speed, the-best-way-to-avoid-a-hit-is-not-be-there thing. Side note: you can’t text with super-speed because your phone can’t keep up, you silly writers.

Knowing you can defend yourself carries immense weight, and you don’t have to be a vampire to have that feeling. I may be nigh invulnerable and heal crazy fast, but you don’t have to prove anything when others can sense it. Some people can fake this, sure, but learning to fight, to take a punch and know you can throw one, is very empowering.

I was wrong, by the way; there are THREE kinds of people. Predators, prey, and the oblivious. The third is the worst by far, those who feign trust by ignoring that predators exist. They have no idea what’s around them or who may be targeting them. They are the comfortable ones…like I used to be.

Sure, you can buddy up with someone to protect you, but nothing beats that feeling of knowing you can do it yourself.

Keep each other (and yourself) safe.